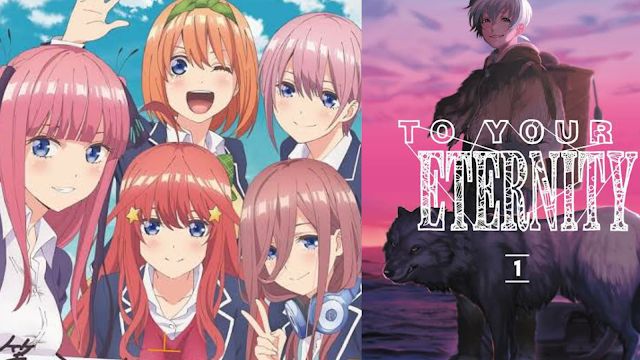 Synopsis To Your Eternity:

“Written by acclaimed creator of A Silent Voice (Koe no Katachi), To Your Eternity is a emotional drama ride which revolves around a lonely boy wandering the Arctic regions of North America meets a wolf, and the two become fast friends, depending on each other to survive the harsh environment. But the boy has a history, and the wolf is more than meets the eye as well… To Your Eternity is a totally unique and moving manga about death, life, reincarnation, and the nature of love.”

“26-year-old Tsugumi Kawana reunites with her first crush from high school, Itsuki Ayukawa, at a get-together between an architecture firm and the interior design company she works at. He sends her heart aflutter, until she realizes he’s now disabled, and in a wheelchair. At first she feels she couldn’t date a guy in a wheelchair, but then her feelings begin to change … ”

Synopsis What Did You Eat Yesterday?

“A hard-working, middle-aged gay couple in Tokyo come to enjoy the finer moments of life through food. After long days at work, either in the law firm or the hair salon, Shiro and Kenji will always have down time together by the dinner table, where they can discuss their troubles, hash out their feelings, and enjoy delicately prepared home-cooked meals!”

Each awardee author received a certificate bronze statuette and 1 million yen (about US$9,100).