Haikyuu!! fans might need to wait a bit more for the season 4 while there is a new good news have arrived. Haruichi Furudate’s Haikyuu!! manga on will be receiving a new spin-off manga titled Haikyubu!!.

Kyōhei Miyajima is drawing the manga. The series will launch on May, 13th on the Shonen Jump+ online manga service. 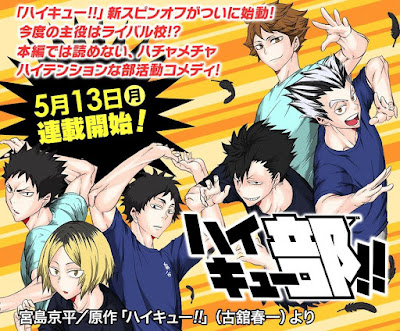 Now its up to Viz Media whether they translate it right from the start or wait for it to become popular as Viz hardly picks Shonen Jump+ or spin-offs. Meanwhile we can rely on the fan translations.

A anime adaptation consisting of three seasons by IG productions is available on Crunchyroll. A season 4 is scheduled is screen in a kick-off even in September.

“Inspired after watching a volleyball ace nicknamed “Little Giant” in action, small-statured Shouyou Hinata revives the volleyball club at his middle school. The newly-formed team even makes it to a tournament; however, their first match turns out to be their last when they were brutally squashed by the “King of the Court,” Tobio Kageyama.

Hinata vows to surpass Kageyama, and so after graduating from middle school, he joins Karasuno High School’s volleyball team—only to find that his sworn rival, Kageyama, is now his teammate.

Thanks to his short height, Hinata struggles to find his role on the team, even with his superior jumping power. Surprisingly, Kageyama has his own problems that only Hinata can help with, and learning to work together appears to be the only way for the team to be successful.

Based on Haruichi Furudate’s popular shounen manga of the same name, Haikyuu!! is an exhilarating and emotional sports comedy following two determined athletes as they attempt to patch a heated rivalry in order to make their high school volleyball team the best in Japan.”