The official Twitter account to Shonen Jump posted a teaser trailer to upcoming series by Masahi Kishimoto. The tweet also revealed the Samurai 8: The tale of Hachimaru Chapter 1 release date. The English translation to Chapter 1 will be freely available on the Shonen Jump app starting from May, 12th.

BIG NEWS! Coming May 12, Samurai 8: The Tale of Hachimaru, written by Masashi Kishimoto the creator of Naruto, with art by Akira Okubo! pic.twitter.com/zapBpepNot

A 4- page preview to manga was released back on 26th. The 4 page included a color page with collaboration to his former series Naruto . While the other three were normal black and white pages. 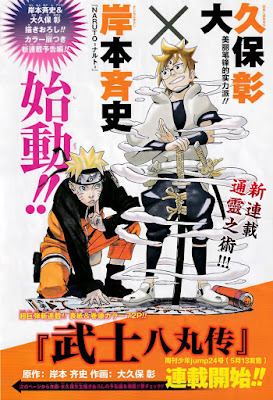 Naruto X Samurai 8 collaboration Visual The series will kick off with a total of 72 pages which is normal for the debuting chapter. Later it will switch to length of 30-40 for few initial chapters for setting up the characters and world building. Further it will be back to normal of 15-20 pages per issue.

In the coming project Kishimoto will be teaming up with his former assistant Akira Okuba who will provide the art to story.

The story seems to be a cyberpunk sci-fi series based on a kid named Hachimaru and his journey to become a Samurai. Fans are having high hopes from Kishimoto’s new project. He teased about his new project back in 2015 during a interview with Jump Giga Magazine. 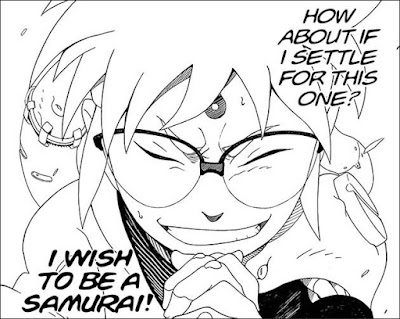 Later a small teaser and visual was revealed at the Boruto stage event in Jump Fest 2019.
Here is what Kishimoto said about his new series:

Being a fan of sci-fi and Japanese rich culture, I decided to bring them together in my upcoming series. I will work hard as possible to stand up your expectations and make it better than Naruto.

Originally created by Masashi Kishimoto, Naruto ran in Shueisha’s Weekly Shonen Jump for 700 chapters. The story follows a young ninja, with a sealed demon within him.


He wishes to become the leader of his village. The sequel Boruto: Naruto Next Generations is set several years after the events of the original Naruto story and features the children of many of its key characters such as Naruto and Hinata.

Samurai 8: The Tale of Hachimaru