The Vinland Saga anime series has revealed a new teaser visual featuring the members of main cast. The anime is slated to release on July 7th, 2019. While it will run for 2 course with 24 Episodes. 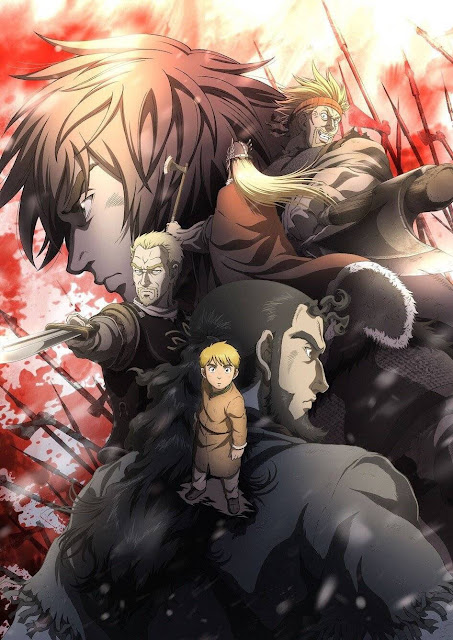 While Wit studio, the popular studio behind series like Attack On Titan, Kabaneri of Iron Fortress and The Ancient Magus Bride will be in charge in of the production.

The series will be available on Amazon Prime Video streaming service worldwide. Shuhei Yabuta will be directing the anime series.

While Hiroshi Seko and Kenta Ihara will be writing the scripts for the series. Also Takahiko Abiru will provide the character designs. Yutaka Yamada will help in music composition.
Shizuka Ishigami will be voicing the Young Thorfinn , while Yuuto Uemura will be charge of voicing the teenage Thorfinn.
KenichiroMatsuda will be voicing the side character Thors.
Yukimura launched the series in Japan in Kodansha’s Weekly Shōnen Magazine in 2005, but Kodansha moved the series to Kodansha’s Monthly Afternoon magazine later that year. Kodansha published the manga’s 21st Japanese compiled book volume on August 23. The series has more than 5 million copies in print.
“Thorfinn, son of one of the Vikings’ greatest warriors, is among the finest fighters in the merry band of mercenaries run by the cunning Askeladd, an impressive feat for a person his age.
However, Thorfinn is not part of the group for the plunder it entails—instead, for having caused his family great tragedy, the boy has vowed to kill Askeladd in a fair duel.
Not yet skilled enough to defeat him, but unable to abandon his vengeance, Thorfinn spends his boyhood with the mercenary crew, honing his skills on the battlefield among the war-loving Danes, where killing is just another pleasure of life.
One day, when Askeladd receives word that Danish prince Canute has been taken as a hostage, he hatches an ambitious plot—one that will decide the next King of England and drastically alter the lives of Thorfinn, Canute, and himself.
Set in 11th century Europe, Vinland Saga tells a bloody epic in an era where violence, madness, and injustice are inescapable, providing a paradise for the battle-crazed and utter hell for the rest who live in it.”