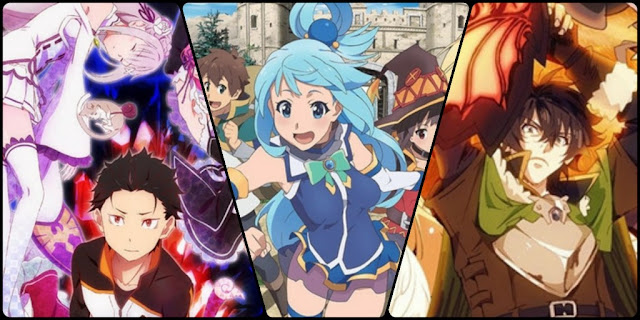 Isekai is one of the biggest and fastest growing genre in Japanese anime and manga culture. In this context popular Japanese Otaku Culture website Akiba Souken conducted a online poll for Japanese fans to pick thier favorite Isekai (Another World) genre anime.

“After dying a laughable and pathetic death on his way back from buying a game, high school student and recluse Kazuma Satou finds himself sitting before a beautiful but obnoxious goddess named Aqua.

She provides the NEET with two options: continue on to heaven or reincarnate in every gamer’s dream—a real fantasy world! Choosing to start a new life, Kazuma is quickly tasked with defeating a Demon King who is terrorizing villages.

But before he goes, he can choose one item of any kind to aid him in his quest, and the future hero selects Aqua. But Kazuma has made a grave mistake—Aqua is completely useless!

Unfortunately, their troubles don’t end here; it turns out that living in such a world is far different from how it plays out in a game.
Instead of going on a thrilling adventure, the duo must first work to pay for their living expenses. Indeed, their misfortunes have only just begun!”

Thirty-seven-year-old Satoru Mikami is a typical corporate worker, who is perfectly content with his monotonous lifestyle in Tokyo, other than failing to nail down a girlfriend even once throughout his life.

In the midst of a casual encounter with his colleague, he falls victim to a random assailant on the streets and is stabbed. However, while succumbing to his injuries, a peculiar voice echoes in his mind, and recites a bunch of commands which the dying man cannot make sense of.

When Satoru regains consciousness, he discovers that he has reincarnated as a goop of slime in an unfamiliar realm. In doing so, he acquires newfound skills—notably, the power to devour anything and mimic its appearance and abilities.

He then stumbles upon the sealed Catastrophe-level monster “Storm Dragon” Verudora who had been sealed away for the past 300 years for devastating a town to ashes. Sympathetic to his predicament, Satoru befriends him, promising to assist in destroying the seal. In return, Verudora bestows upon him the name Rimuru Tempest to grant him divine protection.

Now, liberated from the mundanities of his past life, Rimuru embarks on a fresh journey with a distinct goal in mind. As he grows accustomed to his new physique, his gooey antics ripple throughout the world, gradually altering his fate.

When Subaru Natsuki leaves the convenience store, the last thing he expects is to be wrenched from his everyday life and dropped into a fantasy world.

Things aren’t looking good for the bewildered teenager; however, not long after his arrival, he is attacked by some thugs. Armed with only a bag of groceries and a now useless cell phone, he is quickly beaten to a pulp.

Fortunately, a mysterious beauty named Satella, in hot pursuit after the one who stole her insignia, happens upon Subaru and saves him. In order to thank the honest and kindhearted girl, Subaru offers to help in her search, and later that night, he even finds the whereabouts of that which she seeks.

But unbeknownst to them, a much darker force stalks the pair from the shadows, and just minutes after locating the insignia, Subaru and Satella are brutally murdered.

However, Subaru immediately reawakens to a familiar scene—confronted by the same group of thugs, meeting Satella all over again—the enigma deepens as history inexplicably repeats itself.

In a thoughtless blunder, God accidentally strikes down Touya Mochizuki with a stray bolt of lightning! As an apology, God offers him one wish and the chance to live again in a magical fantasy world.

Touya happily accepts the offer and, for his one wish, asks only to keep his smartphone with him as he begins his journey into this mysterious world.

Starting over in this new world, Touya finds it is filled with magic—which he has an affinity for—and cute girls vying for his attention.

These girls—the twins Linze and Elze Silhoueska, Yumina Urnea Belfast, Leen, and Yae Kokonoe—provide Touya with no end of romantic frustrations, but also companionship as he discovers the secrets of this new world.

The Four Cardinal Heroes are a group of ordinary men from modern-day Japan summoned to the kingdom of Melromarc to become its saviors.

Melromarc is a country plagued by the Waves of Catastrophe that have repeatedly ravaged the land and brought disaster to its citizens for centuries. The four heroes are respectively bestowed a sword, spear, bow, and shield to vanquish these Waves.

Naofumi Iwatani, an otaku, becomes cursed with the fate of being the “Shield Hero.” Armed with only a measly shield, Naofumi is belittled and ridiculed by his fellow heroes and the kingdom’s people due to his weak offensive capabilities and lackluster personality.

When the heroes are provided with resources and comrades to train with, Naofumi sets out with the only person willing to train alongside him, Malty Melromarc. He is soon betrayed by her, however, and becomes falsely accused of taking advantage of her.

Naofumi then becomes heavily discriminated against and hated by the people of Melromarc for something he didn’t do. With a raging storm of hurt and mistrust in his heart, Naofumi begins his journey of strengthening himself and his reputation.

Further along however, the difficulty of being on his own sets in, so Naofumi buys a demi-human slave on the verge of death named Raphtalia to accompany him on his travels.
As the Waves approach the kingdom, Naofumi and Raphtalia must fight for the survival of the kingdom and protect the people of Melromarc from their ill-fated future.

No Game No Life is a surreal comedy that follows Sora and Shiro, shut-in NEET siblings and the online gamer duo behind the legendary username “Blank.”

They view the real world as just another lousy game; however, a strange e-mail challenging them to a chess match changes everything—the brother and sister are plunged into an otherworldly realm where they meet Tet, the God of Games.

The mysterious god welcomes Sora and Shiro to Disboard, a world where all forms of conflict—from petty squabbles to the fate of whole countries—are settled not through war, but by way of high-stake games.

This system works thanks to a fundamental rule wherein each party must wager something they deem to be of equal value to the other party’s wager.

In this strange land where the very idea of humanity is reduced to child’s play, the indifferent genius gamer duo of Sora and Shiro have finally found a real reason to keep playing games: to unite the sixteen races of Disboard, defeat Tet, and become the gods of this new, gaming-is-everything world.

It is quite surprising  to see “In another world with my smartphone” making up above Western popular titles like “No Game No Life” and “The Rising Of The Shield Hero”. While I felt really happy seeing my favorite anime  “Konosuba” ruling the polls followed by “That time I got reincarnated as a slime”. Well did your make favorite Isekai anime made it into list. Do tell us in the comment section.